Docker images are essentially a snapshot of a container. Images are created with the build command, and they'll produce a container when started with run. Images are stored in a Docker Hub.

In this tutorial, we're going to explore Docker images a bit more with a focus on:

Ubuntu-14.04 with Docker installed on your system.

You can list the all images that are available on the Docker host by running the docker images subcommand. The default docker images will show all top level images, their repository and tags, and their size.

To do this run the following command

You will get the list of images, as follows:

In the above output, you can see five items in the preceding listing.

Docker will automatically download any image that is not present on the Docker host system.

The docker pull subcommand will always download the image that has the latest tag in that repository. However, if you choose to download an image version other than the latest, then you can do so by specifying your image with the tag name by using the following command:

For example if you want to download Ubuntu 15.04 image then run:

If you want to download the Ubuntu latest image run the following command:

You can see that each layer of the image has been pulled down. Now, you can run a container from this image and you won't have to wait to download the image.

One of the most important features of Docker is that a lot of people have created Docker images for a variety of purposes. Many of these have been uploaded to Docker Hub. The Docker Hub repository typically hosts both the official images as well as the images that have been uploaded by the third-party Docker enthusiasts. You can easily search for the Docker images in the Docker Hub Registry by using the docker search subcommand.

For example, to search all images that contain the term apache, run the following command:

You can see that the output returns lot of images related to apache. The images are ordered based on their star rating. The search result also indicates whether or not the image is official. Here, you can see the apache tomcat image, which pulls a 496 star rating image as its first result. The third result shows that this version of the apache image was published by the user aboraas.

Updating and Committing an Image

If you would like to make changes to an image, then you will need to create a container from the image.

To create a container from the image run the following command:

Now, install some packages inside container such as apache, wget and nano, then commit changes to the image.

You can do this by run following command inside container:

Once installation has been completed exit your container using the exit command:

Now you have a container with the changes you made into the Ubuntu instance. Next, commit a copy of this container to an image with name apache-instance using the docker commit command. To do that, first you will need the Container ID of running Ubuntu instance. To get that, run the following command:

You can see the following output:

Now, save the changes as a new image with name apache-instance by running the following command:

To verify new image is running or not, run:

You can see the apache-instance image listed below:

Publishing an Image to Docker Hub

The Docker Hub is a central place used for keeping the Docker images in a public or private repository. This allows you to host its image online and share it publicly or keep it private. The Docker Hub provides many features, such as a repository for Docker images, user authentications, automated image builds, integration with GitHub and managing organisations and groups.

In order to work with the Docker Hub, you will need to Create an account on Docker Hub, Log in to the hub on your Docker host and Push your image to Docker Hub. You can create an account using the URL https://hub.docker.com/account/signup. After verifying the email address that you used to create the account, your registration will be complete. This free account will allow you to publish public images as well as have one private repository.

After completing the registration process, you can login to the Docker Hub using a Ubuntu terminal as follows:

After a successful login, the output is as follows:

Before pushing an image to Docker Hub, you will need to tag the apache-instance image.

Note: 7da78270c5f7 is the image id of the apache-instance image, ubuntu is the image tag and hitjethva is your account name on Docker Hub.

Now, Let's push this new Docker image to the Docker Hub from the host machine:

Now, you can login to the Docker Hub using your web browser and verify the image in Repositories. You can see your new image on Docker Hub as follows: 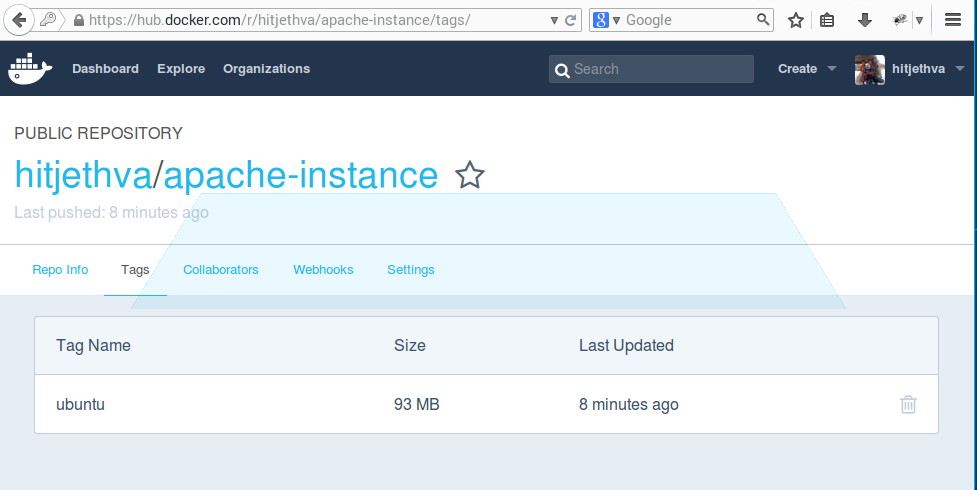 I hope you now have enough knowledge of how to create your own docker image with the necessary changes and push it on Docker Hub. You can also experiment with the above tutorial by setting up virtual environment.

How to Create a Docker Container Using an Interactive Shell

How to Create a Docker Container using Dockerfile

Node.js Authentication – A Complete Guide with Passport and JWT

Truth be told, it’s difficult for a web application that doesn’t have some kind of identification, even if you don’t see it as a security measure in and of itself. The Internet is a kind of lawless land, and even on free services like Google’s, authentication ensures that abuses will...

Node.js and MongoDB: How to Connect MongoDB With Node

MongoDB is a document-oriented NoSQL database, which was born in 2007 in California as a service to be used within a larger project, but which soon became an independent and open-source product. It stores documents in JSON, a format based on JavaScript and simpler than XML, but still with good...

Although data persistence is almost always a fundamental element of applications, Node.js has no native integration with databases. Everything is delegated to third-party libraries to be included manually, in addition to the standard APIs. Although MongoDB and other non-relational databases are the most common choice with Node because if you...